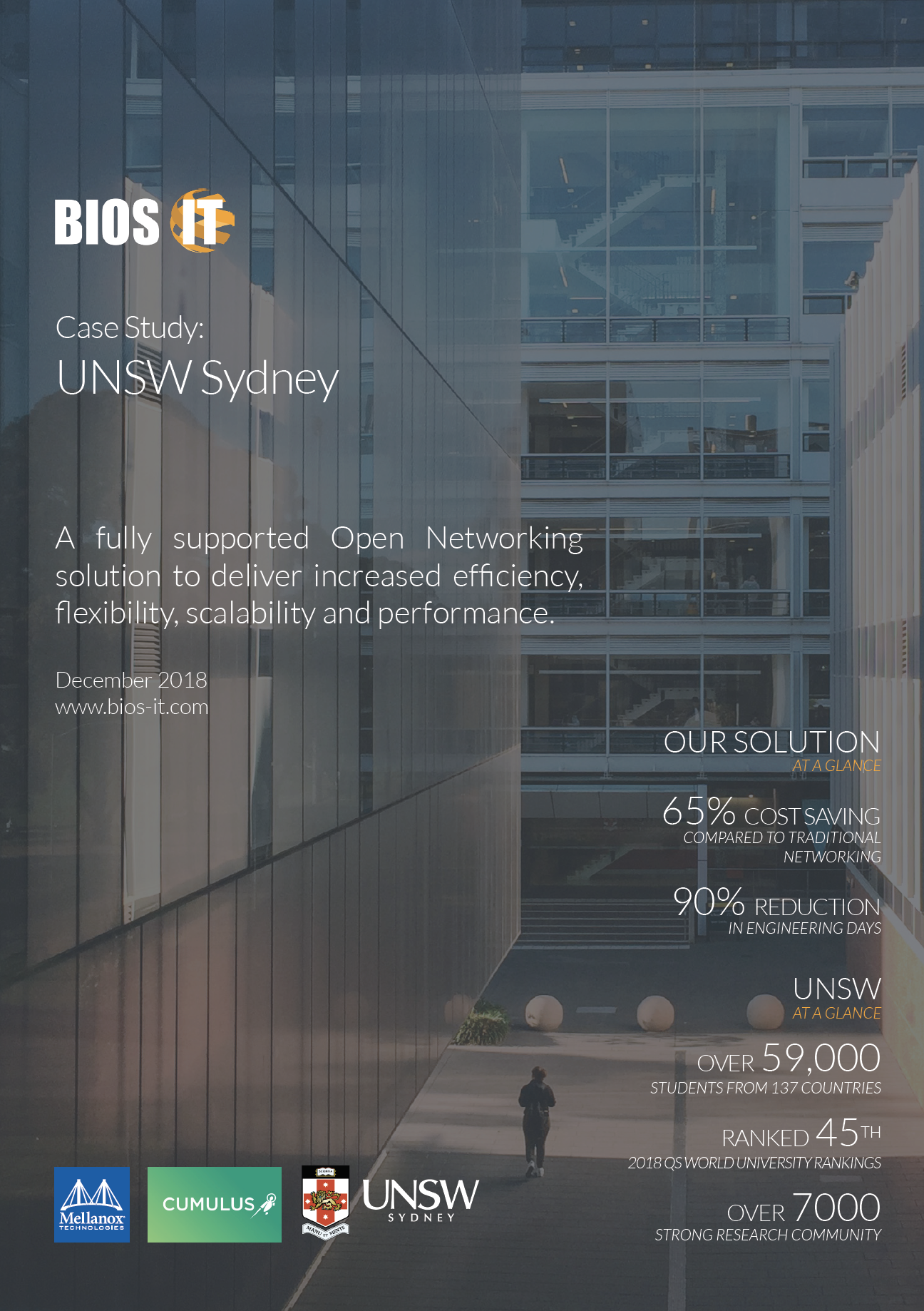 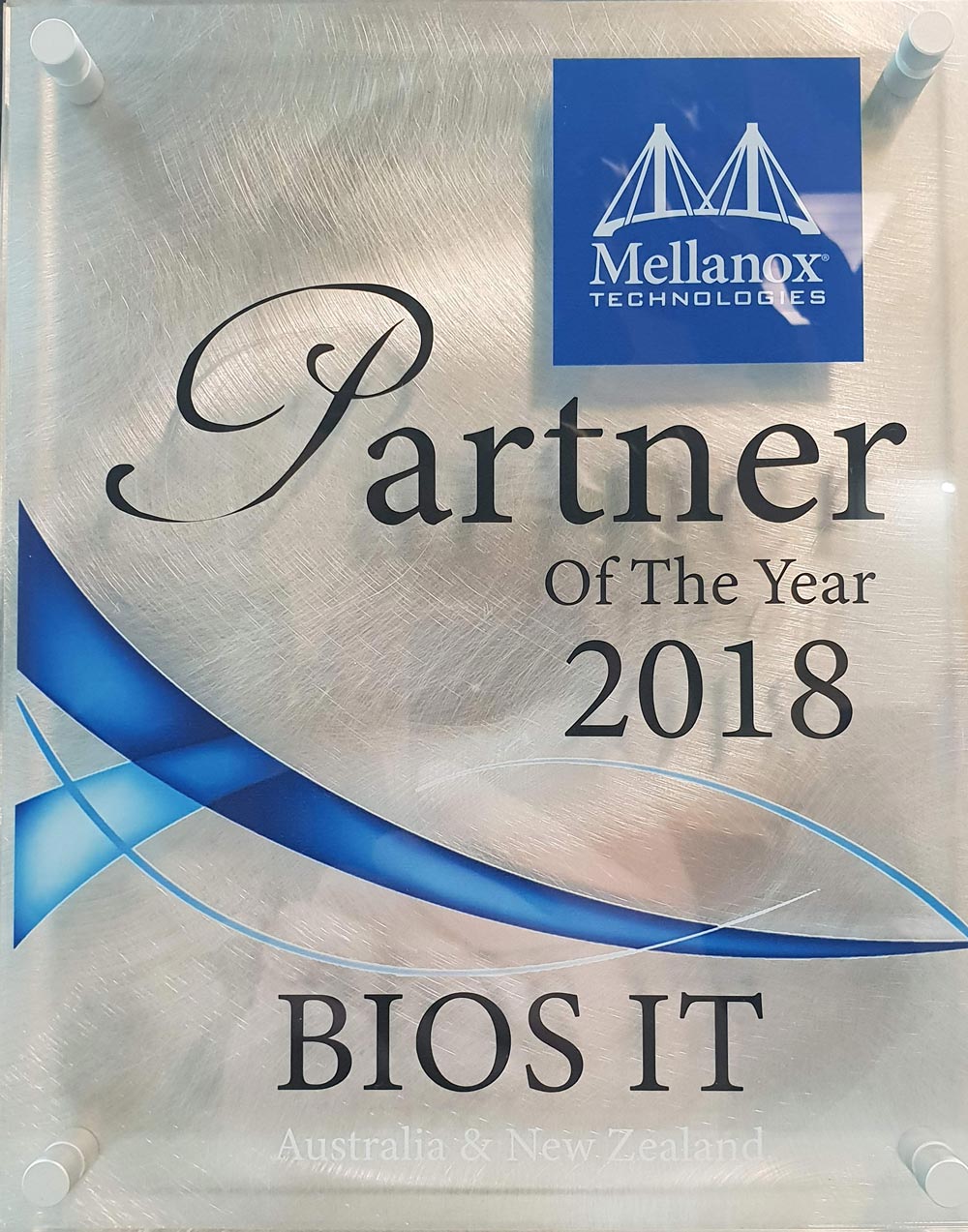 The UNSW Sydney has become the first in Australia to roll out leading-edge Open Networking technology for their corporate infrastructure. BIOS IT were able to improve agility, visibility and security in UNSW’s data centre through simplifying the network architecture. UNSW saved 65% in CAPEX, and a further 90% in Professional Services – totalling in excess of AU$3million. The advanced network design and high-performance hardware mean that UNSW’s investment is future-proofed, the network effectively continuing to support the rigorous demands of a changing business environment. Such has been the success of the first stages of the project that UNSW is now pushing forward to increased levels of automation throughout the network and is looking to implement similar technologies into other areas of their infrastructure.

UNSW required the design, implementation and support of a new data centre networking fabric to support the migration of its corporate infrastructure from an on-campus data centre to a purpose-built off-premise facility provided by GovDC. The challenge was to deliver a functional and highly resilient network, capable of meeting the university’s current needs and supporting future technology innovations - adapting swiftly to the demands of modern-day applications and changes in the business environment. The solution had to deliver all of this while minimising risk, reducing cost and be completed within a constrained timeframe.

BIOS IT, with Mellanox Technologies and Cumulus Networks, delivered a state-of-the-art 100GbE network based on the principals of web-scale Open Networking. Through the disaggregation of networking hardware and operating system, the solution provided UNSW with increased efficiency, flexibility, scalability and performance.

Thanks to the power of automation through Cumulus Linux Network Operating System, the design, configuration and deployment of both production and management networks was completed by one engineer in 18 days - a 90% reduction compared to the competition. BIOS IT chose best-of-breed networking hardware from Mellanox Technologies which enabled UNSW to build a cutting-edge networking fabric which not only responded to today’s requirements in the most efficient manner but also gave them peace of mind that the fabric will scale to accommodate tomorrow’s needs.

“Deploying Open Networking in our data centre with BIOS IT was a smooth and seamless operation – far less complex than our initial expectations. BIOS IT helped us create a flexible, scalable platform to support the ever-growing demands of modern IT applications and increasing user-base. It has given us the freedom to focus on innovating for the future of UNSW “Mark Griffith, Director of Customer Service Delivery, Director of Research IT, UNSW IT

By embracing highly proven technologies such as web-scale Open Networking, the university now benefits from improved visibility and troubleshooting, reduced power, reduced cost (CAPEX and OPEX) and increased human resource efficiency. The university’s engineers felt no impact from the migration – they were simply able to physically ‘lift and shift’ compute and storage hardware to a new DC, connect into the new network and business continued as usual. This was, in itself, an incredible feat and was made possible by Cumulus VX, a virtual environment in which Cumulus engineers created a prototype of the entire network to emulate all configurations and network settings. Over 100 switches were configured and brought online by one engineer in less than half a day, without any need for on-the-fly fixes or changes, since the entire design had been proven out in the virtual lab ahead of time.

Through contemporary design, the new network enables the UNSW team to benefit from flexibility and scalability, allowing them to keep ahead of the dynamic demands of today’s agile IT service delivery models. Such has been the success of the first stages of the project that UNSW is now pushing forward to increased levels of automation throughout the network and is looking to implement similar technologies into other areas of their infrastructure.