Last week, BIOS IT exhibited at SC18 - the biggest event in the HPC calendar year. SC18 is the world’s largest conference for HPC and networking professionals, attracting scientists, engineers, software developers, policy makers, corporate managers, CIOs, and IT administrators from universities, industry, and government agencies worldwide. With more than 13,000 attendees from around the world, the event showcases the latest innovations in HPC, networking, storage, and analysis to a Global HPC audience. In this event round-up special, we bring you the latest news and announcements from the conference.

The solution combines leading GPU accelerator technology and intuitive scale-out storage in one platform for the analysis of Next Generation Sequencing (NGS) and medical image data. Gene Genie integrates and optimizes widely used genomics pipelines and Medical Image Computing (MIC) applications into one easy to use environment for secondary and tertiary analysis.

Gene Genie delivers up to 30x faster secondary analysis of genomics and MIC workflows and will reduce the time and cost of analysis by transforming monolithic CPU based pipelines to run on the highly parallel architecture of GPUs - all housed and managed under a single pane of glass.

HPC MOVES TO THE CLOUD

Cloud was another big topic at SC18. And rightly so. While Cloud has a way to go before replacing traditional on-premise HPC completely, cloud providers are accepting the truth about the economics of HPC and are adjusting their offerings to win on business value.

With recent announcements in the IaaS and HPCaaS space, Cloud providers are gradually closing the gap between themselves and on-premises HPC and all signs point to it eventually becoming the leading means of deploying HPC capacity in most scenarios.

BIOS IT showcased the HPC optimised cloud solution ‘vScaler’ at the event - a private cloud platform that enables customers to implement a secure, scalable and flexible IT infrastructure, enhancing transformation and creating operational efficiency with true business benefit.

Delivering HPC as a Service and  Infrastructure as a Service (IaaS). vScaler allows you to provision full HPC-on-Demand clusters, Big Data analytics, accelerated GPU compute (for Machine Learning), tiered and accelerated storage platforms. In contrast with other IaaS only platforms, vScaler works with its clients to optimise their infrastructure to allow their desired applications to run successfully in a private cloud environment. 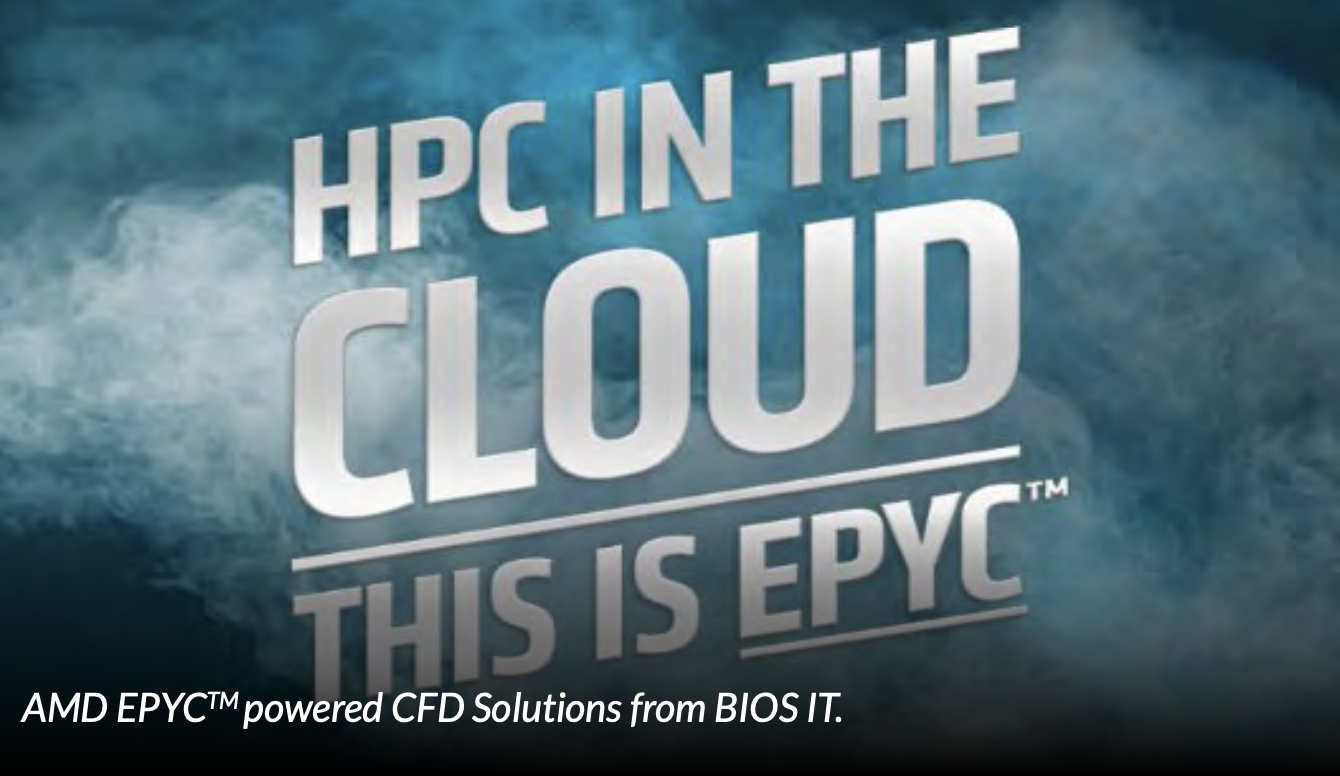 AMD is set for an ‘EPYC’ 2018. Delivered to the market earlier this year, AMD EPYCTM has been winning – and convincingly at that – the price/performance bake-off against Intel Xeon.

In the week leading up to SC18, AMD announced its next-generation EPYCTM chip - ‘Rome’ and the latest Radeon GPU. With up to 64-Zen2 cores, the 7nm Rome chip provides at least two times higher performance per core than first-generation EPYCTM chips. The revamped Radeon Instinct line, the MI60 and MI50, are the world’s first 7nm datacenter GPUs and feature flexible mixed mixed-precision capabilities. Both families support PCIe gen4.

SC18 proved to be event of choice for major AMD announcements from the likes of the University of Notre Dame Center for Research Computing, Oregon State University, F1 HAAS Racing Team, Laurence Livermore, The High-Performance Computing Center of the University of Stuttgart (HLRS) and the National Institute for Nuclear Physics in Italy - who all announced they have deployed or are in the process of deploying AMD EPYCTM-based systems.

At the event, BIOS IT announced its AMD EPYCTM powered solutions for Computational Fluid Dynamics (CFD) and is offering customers the ability to run simulations on its own state-of-the-art clusters, backed by a team of experts. The CFD Solutions Team can aid in tuning meshing and solver performance through process and memory bindings, to deliver staggering results. Including integrated, industry-leading software such as ANSYS, Open-FOAM, Pam-Crash and STAR-CCM+, the solution is specifically designed to improve development efficiency.

JENSEN HUANG ON THE NEW HPC

NVIDIA CEO Jensen Huang delivered a lengthy keynote on the opening day of SC18 and presented his expansive view of the future of HPC. While there were no major technology announcements made during the talk, Huang focused on the challenges and solution approaches within HPC that are driving the vast and rapid adoption of GPUs within the sector.

The rise of GPU-based heterogeneous architectures is clearly evident in recent Top500 lists. NVIDIA GPUs were in 127 systems on the newest list, including Summit and Sierra, now the two fastest supercomputers in the world. Likewise, NVIDIA’s embrace of mixed precision capabilities, so essential for machine learning and deep learning performance, is evident in the Tensor Core technology it deployed on the Volta100 and T4 GPUs.

> GPU IN THE CLOUD 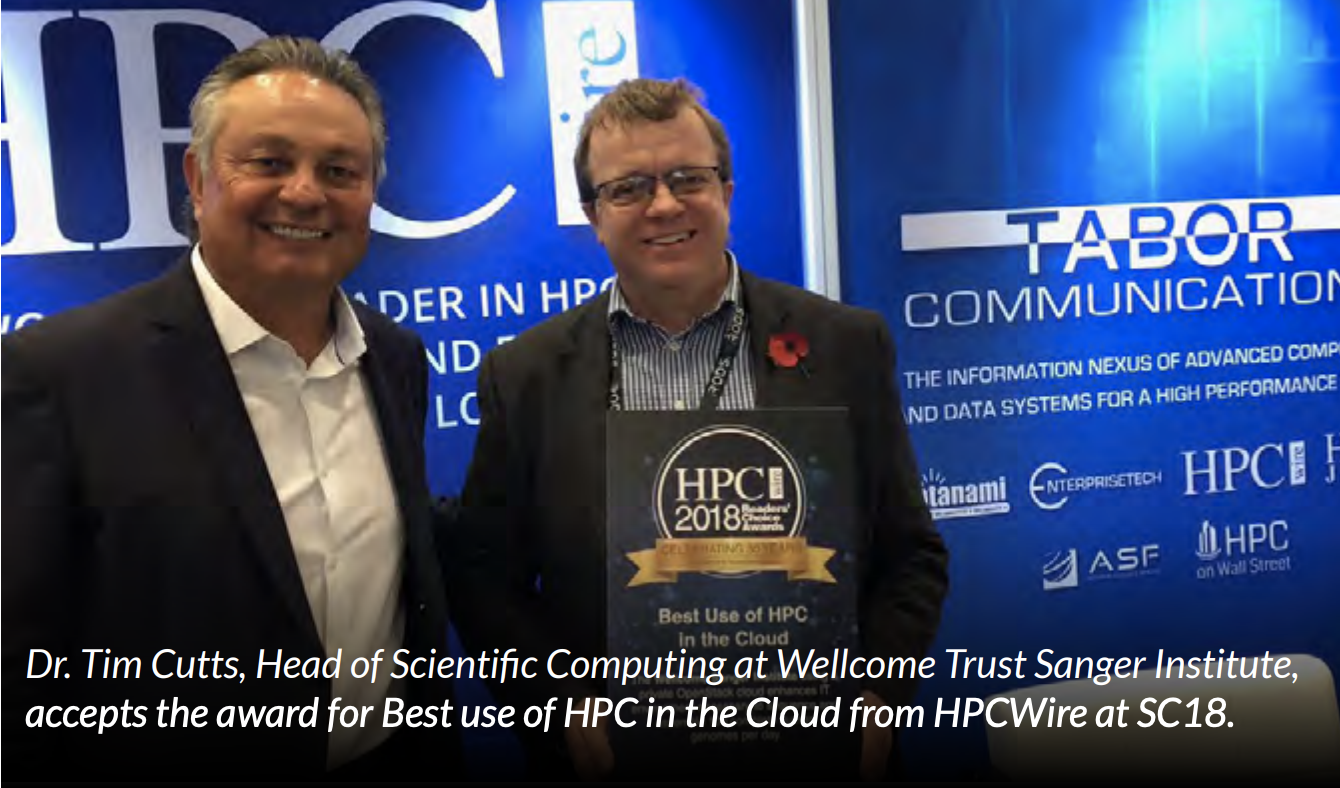 HPCwire, the leading publication for news and information for the high-performance computing industry announced the winners of the 2018 HPCwire Readers’ and Editors’ Choice Awards at the Supercomputing Conference (SC18).

“This year is a milestone year as it marks the 30th anniversary of SC and the 15th anniversary of The HPCwire Readers’ and Editors’ Choice Awards. These awards serve as a pillar of recognition in our community, acknowledging major achievements, outstanding leadership and innovative breakthroughs.” Said Tom Tabor CEO of Tabor Communications, publisher of HPCwire.

The Wellcome Trust Sanger Institute was awarded ’Best Use of HPC in the Cloud’ - using a private OpenStack cloud to enhance the IT environment necessary to sequence and assemble 100 complete human genomes per day. BIOS IT was proud to play its part in this award-winning solution, tasked with deploying a flexible, robust and cost-efficient cloud computing architecture, based on Supermicro building blocks. 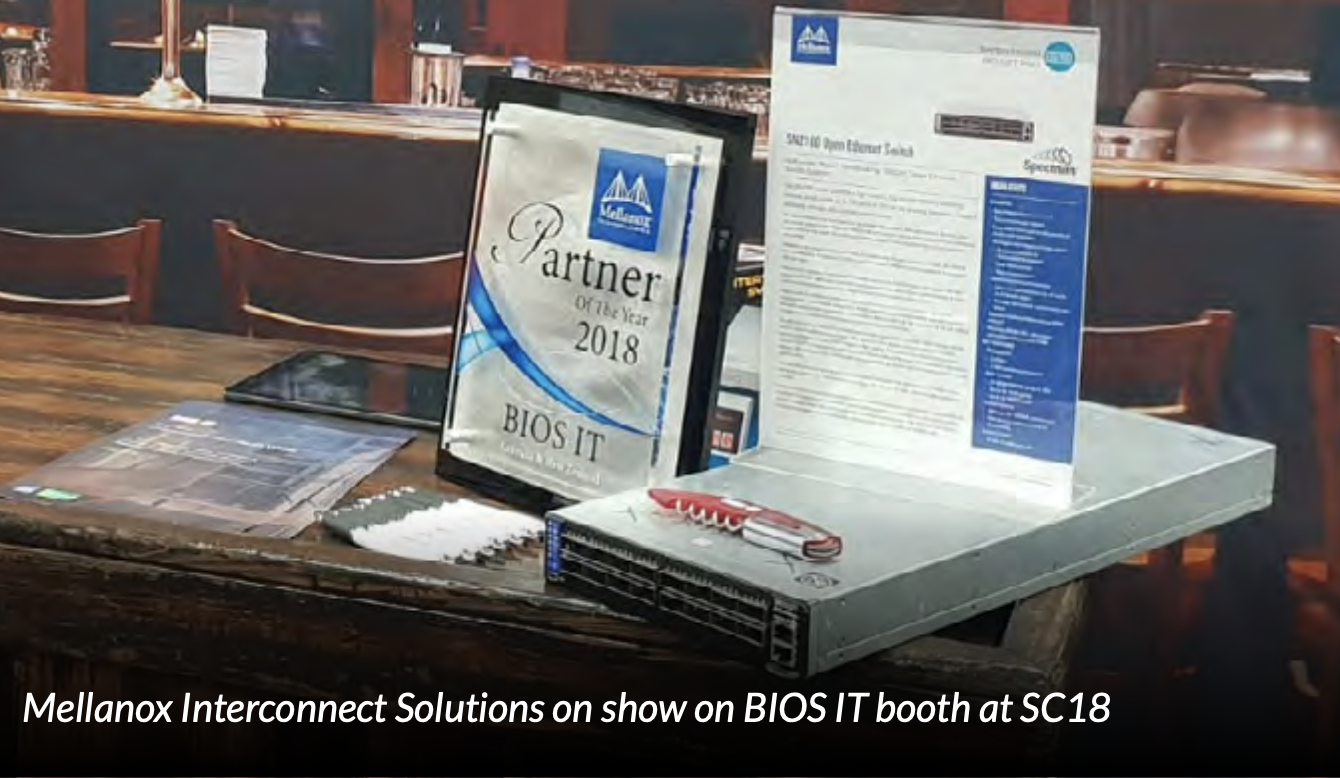 Mellanox® Technologies announced that the company’s InfiniBand and Ethernet solutions connect 53% of the overall TOP500 platforms or 265 systems, demonstrating 38% growth within 12 months (Nov’17-Nov’18). Furthermore, InfiniBand accelerates the top three supercomputers on the TOP500 list: the fastest High-Performance Computing (HPC) and Artificial Intelligence (AI) supercomputer in the world deployed at the Oak Ridge National Laboratory, the second fastest supercomputer in the US deployed at the Lawrence Livermore National Laboratory, and the fastest supercomputer in China (ranked third).

Mellanox was honoured with nine HPCwire Readers’ and Editors’ Choice Awards at the conference. The nine awards span a variety of categories and acknowledge the company’s leadership in developing and delivering high speed interconnect solutions for high-performance computing (HPC), artificial intelligence (AI) and other compute and storage-demanding infrastructures and applications.

BIOS IT recently partnered with Mellanox Technologies and Cumulus to simplify a leading Sydney based University corporate data centre through Open Networking. Saving over $3 million in CAPEX and 4 months of professional services and enabling it to transition to a network that can support and scale to the requirements of over 60,000 students.

FPGA FOR HPC FROM XILINX

Xilinx announced that it is expanding its recently-announced Alveo™ data centre accelerator cards portfolio with a new product, the Alveo U280, offering new features including support for high-bandwidth memory (HBM2) and leading edge, high-performance server interconnect. The Alveo portfolio of powerful accelerator cards is designed to dramatically increase performance in industry-standard servers across cloud and on-premise data centres.

The new Alveo U280 accelerator card offers eight gigabytes of HBM2 at 460 gigabytes-per-second to provide high-performance, adaptable acceleration for memory-bound, compute-intensive applications including database analytics and machine learning inference. The U280 acceleration card includes PCI Express 4.0 with CCIX support to leverage the latest server interconnect infrastructure for high-bandwidth, low latency, cache coherent shared memory access with upcoming CCIX host processors. All of these features are designed to support today’s demanding HPC environments, as well as other common data centre workloads such as financial trading and risk modelling, database acceleration and more. The Alveo U280 will start sampling in Q1 2019.  For more product information and to register for updates, customers can visit www.xilinx.com/u280. 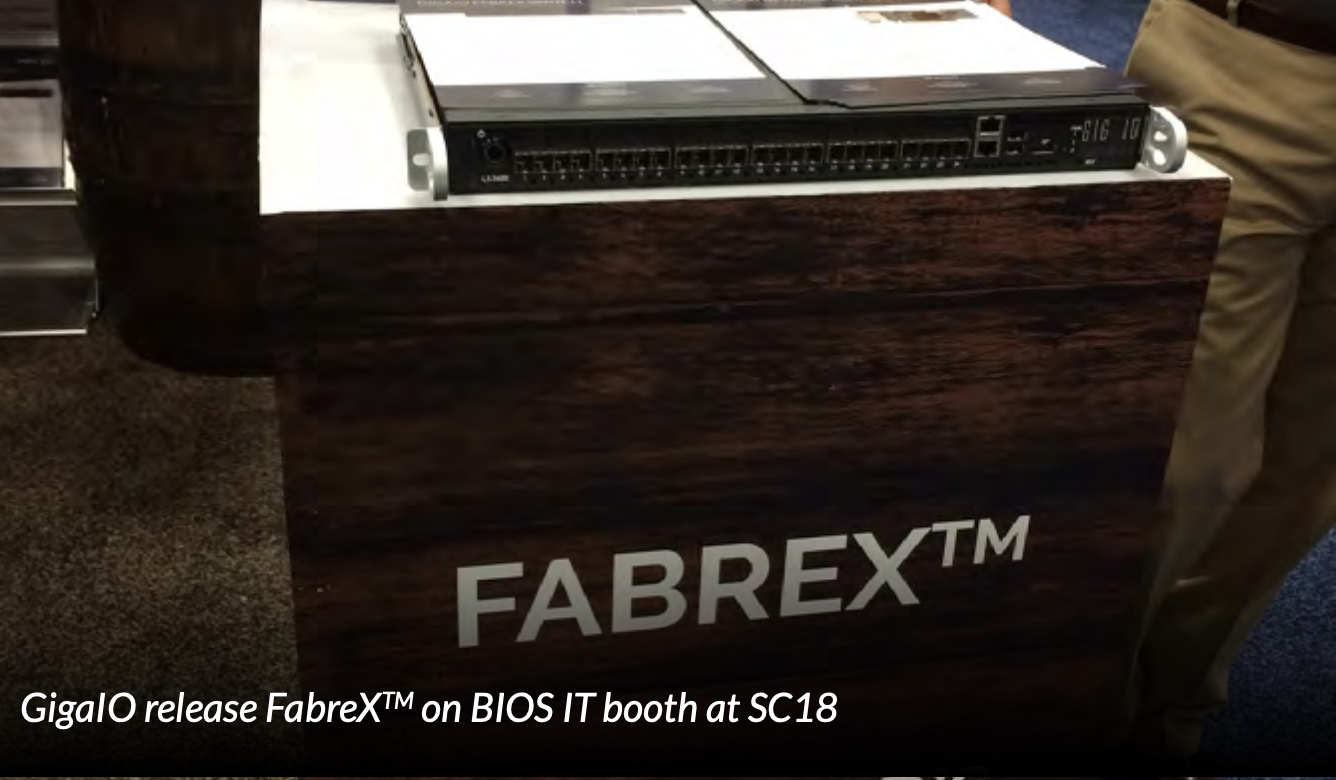 GigaIO announced the release of the GigaIO FabreX™ platform - the first hardware and software solution to dramatically, yet affordably, increase advanced scale computing performance while allowing flexible utilisation and protecting the investments already made by its customers in compute, accelerator and storage hardware. FabreX is an industry-leading hyper-performance network that delivers improved resource utilization and a unified, software-driven composable infrastructure for optimal user flexibility.  The technology accelerates the performance and composability of GigaIO software-defined infrastructure (SDI).

BIOS IT announced its partnership with GigaIO at SC18. This new alliance will deliver disaggregated infrastructure solutions to its HPC, FinTech and Cloud customers. Composable/Disaggregated infrastructure (CDI) is an emerging category of infrastructure systems that make use of high-bandwidth, low-latency interconnects to aggregate compute, storage, and networking fabric resources into shared resource pools that can be available for on-demand allocation. Disaggregation and composability enable organisations to meet the demands of new data-intensive applications and dynamically assign resources to match changing workloads.

Through its new partnership with GigaIO, BIOS IT will enable a new breed of high-performance cluster computing with a suite of disaggregated networking solutions – bringing radical performance capability and flexibility to systems running on industry standard hardware.

Supermicro’s new NVIDIA® HGX-2 based SuperServer supports 16 NVIDIA Tesla® V100 Tensor Core 32GB GPUs connected via NVIDIA NVLink™ and NVSwitch™ to leverage over 80,000 CUDA cores and delivers unmatched performance accelerating AI and HPC on-premise and in the cloud. This new system can deliver up to 2 Petaflops of performance and occupies just ten units of rack space.

To help simplify the deployment of AI and HPC applications in the data centre, AI optimised solutions from Supermicro (available from BIOS IT) are NGC-Ready. Customers can now run GPU-accelerated software from the NGC container registry, including its expanded HPC and AI software library with new machine learning and analytics containers and the latest generation GPUs with NVIDIA NVLink.

Every year SC promises to deliver the best of the best in HPC, and this year was not a disappointment. With record-breaking attendance numbers and ground-breaking announcements at the event, it is clear that HPC has the power and promise to solve the world’s most difficult challenges.

For more information on any of the above announcements or our complete range of HPC Solutions, please contact us.